French luthiers soon deprived of wood for their bows – English 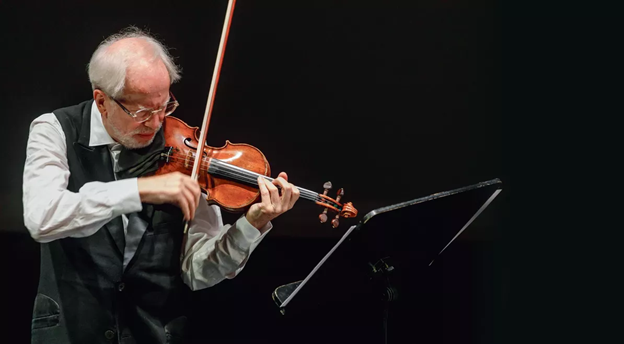 French luthiers soon deprived of wood for their bows

INVESTIGATION – The possible increase in the level of protection of this substance from Brazil, necessary for the manufacture of bows, alarms the musicians.

It is an art craft that acquired its letters of nobility in France at the end of the 18th century. It is a profession that could appear in a few years on the list of professions in danger of extinction. The match that ignited the powder, first setting fire to the confidential milieu of bowmakers before spreading to the world of lutherie and the entire musical industry, is a seemingly innocuous proposal from Brazil.

In view of the next Convention on International Trade in Endangered Species of Wild Fauna and Flora (Cites), from 14 to 25 November in Panama, the country proposes to transfer Paubrasilia echinata, endemic to the Atlantic Forest of Brazil also known as pernambuco, from Appendix II to Appendix I of the Cites regulation.  “Clearly, it will definitely be impossible for us to restock in pernambuco once our stocks are exhausted,” fumes the bowmaker Edwin Clément.  However, this is essential for the manufacture of bows. This is the programmed disappearance of the profession, despite its efforts for more than twenty years to help preserve the species!”

READ ALSOThe luthiers of Cremona told by their instruments

“This announcement was experienced by the luthiers as an electroshock,” confirms Coraline Baroux-Desvignes. The delegate of the CSFI (Chambre syndicale de la facture instrumentale) denounces the measure “totally disproportionate”.  If all bowmakers are aware of the threats to the species, victim in colonial times of overexploitation as dyewood, “to suggest that these craftsmen are now endangering the species, especially threatened by deforestation or the dismantling of the cocoa-cabruca agroforestry system, is an aberration,” she continues. Without hiding his concern about the disappearance of the 109 French bowmakers in activity (15% of global activity). “We have already experienced this with Ivory workers and the tortoiseshell workers, whose know-how has totally disappeared,” warns the bowmaker Arthur Dubroca. Based in the 17th arrondissement of Paris, the latter estimates that it will be able to last ten to twenty years with its stocks.  “I have enough to finish my career. But for my younger partner, as for a large number of professionals, it will be the pure and simple end. But bowmaking is everywhere in the world a symbol of French excellence,” he recalls. This is confirmed by the violinist and conductor Jean-Pierre Wallez, who denounces a “proposal of technocrats as unbearable as ridiculous. French bows are masterpieces sought after all over the world!”

Pernambuco, a species endemic to Brazil’s Atlantic Forest, threatened with extinction, whose trade, export and circulation could be banned.  BrazilPhotos/Alamy via Reuters Connect

If the Ministry of Culture and the Ministry of the Economy have assured the CSFI to follow the file closely, “no clear position has for the moment been indicated by France, where several countries such as Austria or Japan have already indicated that they will vote against”, regrets the luthier Jacques Carbonneaux, in charge of mission to the CSFI on ecological issues. For him, this amendment is totally counterproductive, and will not solve the issue of local traffic.

In the fifteen-page document that accompanies its proposal, Cites points the finger at the illegal trafficking of which pernambuco, heavily regulated in 2007 (and which since then has not been the subject of new export quotas) has been a victim for fifteen years in Brazil. “A traffic that turns the belly of all our craftsmen, and that we denounce unambiguously, says Coraline Baroux-Desvignes.  But the solution is a firmer control of exports on the spot, and not the outright cessation of international trade in bows in Pernambuco.”  Opinion shared by Arthur Dubroca, who recalls that if the figures of seizures evoked by Brazil

(102 logs hidden in the property of a bowmaker, 20,747 rods of bows seized) look like a punch argument, “these volumes are only a drop of water on the scale of the Atlantic Forest”.

Orchestras in the viewfinder

For Jacques Carbonneaux, the description of archery as a predatory activity does not pass. “They want us to blame for deforestation, whereas since the 1970s bowmakers have been involved in the replanting of the species.”  Since 2003, bowmakers from all over the world have come together in the IPCI (International Pernambuco Conservation Initiative), to finance a replanting program.  “A biomimetic program that is neither commercial nor greenwashing. The vast majority of the 340,000 trees already replanted by IPCI are destined to remain on site,” he says. Recalling that “a single pernambuco tree is enough for the annual production of the hundred or so French bowmakers!”

The CSFI is also convinced: “Archery and violin making contribute to raising awareness around the need to preserve endangered species. It is a weapon against deforestation.”  An opinion shared by many musicians.  “This story of pernambuco is the tree that hides the real problem: deforestation in Brazil, which has nothing to do with archery,” says Sophie Bollich, violinist of the National Orchestra of pays de la Loire and president of the National Union of Musicians’ Unions (SNAM-CGT). Because beyond the world of violin making, it is the entire ecosystem of classical music that could be affected by this amendment. “If the text passes in November, we will have three months to comply… Already impossible for us, given the administrative overload. So for all the simple owners, who will need a Cites certificate to maintain, resell or simply circulate from one country to another with their bow, it will become Kafkaesque, “warns Arthur Dubroca.

The lifespan of a pernambuco bow can range from several decades to several centuries, not everyone will have the opportunity to get their hands on the original invoice to prove that the pernambuco comes from a stock before 2007. “And we do not see how the authorities of the Cites will be able to respond to all the requests of musicians,” adds Coraline Baroux-Desvignes. According to the latest survey conducted by the European Federation of Performing Arts Organisations (Pearle), almost all strings in European orchestras use one (most often two) pernambuco bows. “In France, the passport that must be issued by Cites for each bow will be valid for three years and free of charge. But that’s not the case everywhere.”  Pearle calculated that a tour of the orchestra of the Komische Oper in Berlin will cost the phalanx an additional 20,000 euros in Cites formalities.

Let’s not talk about delays in customs clearances, or the blocking of musicians at the borders. “The risk is that the tours, already tested by the Covid, become such a hell that a large number of orchestras give it up,” worries Aline Sam-Giao, director of the Orchestre national de Lyon and president of the Forces musicales. Tours will not be the only ones impacted. “This will make it just as complicated to invite international soloists.”  The latter, like the violinist Gidon Kremer (see opposite) do not hesitate to make their voice heard in the face of the imminence of the decision.

Because bowmakers and musicians are convinced: we can not replace the qualities of pernambuco. “The carbon fiber bow is effective,” concedes Jean-Pierre Wallez.  Not fragile. Not subject to hygrometric changes. But with pernambuco you dig into the string and into the emotion right away.”  A perception that Iris Brémaud, CNRS researcher at the Laboratory of Mechanics and Civil Engineering of Montpellier, prefers to nuance.  “In terms of mechanical properties, even if we still have little data, we see above all its extreme variability from one tree to another. For the rest, pernambuco does not seem to be in extremes of density or rigidity compared to the great diversity of woods.”

READ ALSO“When I lost my violin, I lost my whole life”: the lament of musicians in the face of instrument theft

What is exceptional, however, continues the scientist, “is its color. Which can play a significant role in the perception of bowmakers and musicians”.  Its color. But also “the very low vibration damping that its heartwood would offer”.  Is this where the secret of pernambuco lies, and its inestimable value in the eyes of bowmakers around the world since a certain François-Xavier Tourte laid the foundations of the modern bow? While waiting for the answer, the CSFI intends to go to Panama in November to make its voice heard… And remember that the world of lutherie also carries the values of ecology.